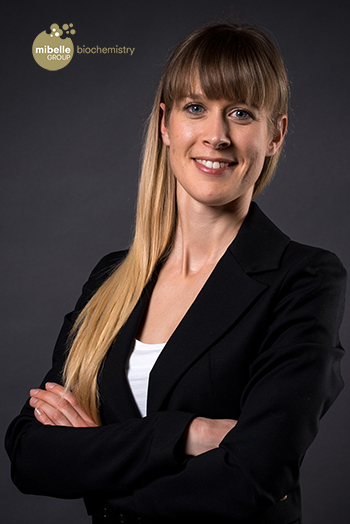 You recently have launched SantEnergy ™ obtained from the aerial parts of the Yerba Santa plant.

Yes, SantEnergy™ is the newest addition to our product portfolio. As we had observed that hair and scalp care have become increasingly important, we sought to develop an active ingredient that protects the most vulnerable part of the hair, the hair follicles, from environmental and endogenous stresses. We believe that a healthy scalp and roots are the basis for healthy hair, and thus providing new energy to the hair follicles will support the growth of full and kempt hair in individuals suffering from stress-related hair loss.

The „Yerba Santa“ plant or “Holy Weed” is rather known to be used for medicinal purposes like for respiratory illnesses. How come you claim hair benefits for it?

Besides being used to treat upper respiratory infections in traditional medicine, Yerba Santa was also described to have anti-inflammatory, anti-bacterial, antioxidant and neuro-protective benefits. As we were looking into plants which can reduce the oxidative stress in the hair follicles caused by endogenous and environmental factors, the high antioxidant capacity of Yerba Santa was very intriguing to us. We therefore further characterized the active in this new context.

What is the active ingredient in SantEnergy™?

The high content of polyphenolic compounds in Yerba Santa has already been described in the 1980s and the various molecules have been well characterized since. In particular the bitter-masking flavanones homoeriodictyol, eriodictyol and sterubin are highly potent antioxidants, which we found during the development process in the Yerba Santa extract that is the basis for SantEnergy™.

What claims do you make for your product?

SantEnergy™ has two modes of action that complement one another very well: on the one hand it has an energizing effect similar to that of caffeine, and on the other hand it is a strong antioxidant. Through these actions, it delays the premature aging of hair follicles and protects hair follicle cells from oxidative damage. As a result, it increases both hair growth and hair density, so that the hair will be invigorated and strong.

How did you substantiate these claims?

We have performed various in vitro and clinical studies to test the active’s efficacy. In a first in vitro study, we could show that SantEnergy™ binds to the adenosine receptor, which is also the molecular target of caffeine and we therefore presumed an activity similar to that of caffeine. To confirm this putative caffeine-like activity, we assessed the effect on the model organism C. elegans. These nematodes react to caffeine with an increase in their movement, and we could show that SantEnergy™ has the same effect on them, thus it indeed has a caffeine-like energizing effect. The antioxidant activity of the Yerba Santa active was shown both in cells and on isolated hair follicles. There, it protected the hair follicle cells from UVB-induced damage by upregulating the protective factor Nrf2, and reducing oxidative DNA damage. It further prevented premature transition to the late catagen phase by maintaining proliferation and reducing cell apoptosis in the hair follicle. Together, these activities led to the positive outcome in the clinical study we performed with 56 volunteers suffering from hair loss. Compared to the placebo group, we observed a strong increase in the hair growth coefficient (anagen/telogen ratio) in the subjects who had applied a hair serum containing SantEnergy™. This was caused by a significant increase of the number of hairs in the anagen phase, and a decrease of hairs in the telogen phase. As a result, the overall hair density had increased, confirming that SantEnergy™ had improved the hair loss of the volunteers.

How important are innovations for you?

Innovation is a cornerstone of our philosophy. While we have developed several innovative technologies, such as PhytoCellTec™ or MossCellTec™, in the past years, and we have brought liposomal delivery systems to the field of cosmetics, we are also following the latest research in the fields of aging, skin and hair biology. This is also what inspired us to develop this novel active ingredient: in the past years, research on the scalp and hair follicles showed how UV irradiation and pollution leads to oxidative damage of the hair follicles, which affects the hair cycle and ultimately leads to hair loss. With this knowledge, we could now launch an innovative active ingredient that tackles a problem of modern society which was only very recently described.

No events, no conferences, no visiting of clients in Corona times. How do you keep in touch with the markets?

Already before the pandemic, we had a strong online presence on multiple channels, which helped a lot to adapt at the beginning of this crisis. Even more than before, we now use dedicated webinars for introducing new products and presenting new study results. And in addition to that, our great sales team and distributors all over the world organize countless online meetings to keep in touch with customers, hear about their needs and problems and get valuable feedback from the markets. Luckily, technology enables us to even see each other virtually, which is the closest we can get to face-to-face meeting these days.