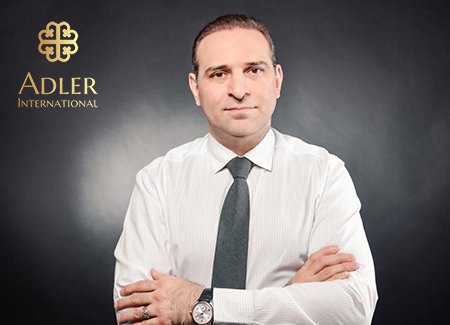 Dr. Azimzadeh, you are the founder of Adler International GmbH, whose aim is to present high-quality essential oils, but especially Persian rose oil, internationally with a new approach.

How did this goal come about and what drives you?

Persia is the origin of rose cultivation. Later, in the 17th century, roses were also cultivated in India, North Africa and Turkey. In Europe, rose cultivation first developed at the beginning of the 18th century in Bulgaria, which at that time was part of the Ottoman Empire.

Among the many oils in Persia, rose oil and rose water have always had a special place. This tradition was passed on and established in all Islamic countries, especially after the Islamization of Iran, but the Persian scent of the rose, just like the Persian carpet, always remained the secret number one among connoisseurs.

Among other things, it is thanks to the special ecosystem, the cultivation location and the special sunlight on the edge of the desert that Persian rose oil has this unique scent and the special greenish colour. Characteristics that have always been decisive for all lovers of rose products. This even goes so far that traditionally, still, the holiest site of the Muslims - the Kabaa in Mecca - has to be sprayed annually only with Persian rose water from Kashan, which is self-explanatory.

In Iran itself, rose oil is now cultivated in almost all parts of the country (Kashan, Shiraz, Kerman etc.), but the Kashan region is and remains the region with the most exotic and breathtaking rose oil scents.

Unfortunately, at some point, the age-old tradition of rose oil production, which was passed down from father to son, was neglected to be updated rapidly enough, so that Persian rose oil no longer plays the leading role in the present, but only a very tiny one. Therefore, from Hamburg, one of the most traditional trading metropoles in the world, we decided to tackle the initiated goal of reorientation even more professionally and later to include special oils from other parts of the world in the assortment.

How did Persian Rose Oil experience the decline on the international trading platform?

Well, somewhere in the 20th century, with a growing interest in high quality oils, came a new trade and manufacturing culture. The traditionally produced rose oil, which no longer met the higher demands and not least the new criteria of the companies, could not meet the new conditions of the cosmetics manufacturers and their customers, who were looking for even more purity and better, consistent quality. On top of that was the failure of the Iranian producers, who were mostly farmers of the respective region and whose inherited business was mostly a secure rose water trade, and who did not feel compelled to adapt to the new international standard criteria and conditions, or even to think about export and world trade, due to the lack of facilitating government regulations.

These are just some of the most important parameters, which is why steam distillation only gained a foothold in Iran much later than in other countries and why Iran only became internationally known very late and in an unsystematic way.

You have brought rose water into focus. What role does rose oil production play in Iran today?

That is correct. One of the reasons why Iran is very sluggish in the international arena for rose oil is without question the great domestic demand for rose water. This is an important part of the food and natural healing culture not only in Iran, but also in the neighbouring countries of the Persian Gulf. Therefore, they do not feel compelled to switch to oil production, but consider rose oil only as a by-product that has buyers from time to time. This culture is now gradually taking a turn towards rose oil and is part of our commitment.

What role does your company play in the international placement of Persian Rose Oil and other oils?

Adler International GmbH in Hamburg has set itself the goal as a German company and member of SEPAWA e.V. to address the above-mentioned weaknesses in its international presence. The selection of suppliers and permanent control of the few Iranian producers in question, their training and constant communication on the ongoing needs and changes of the world market, but last but not least to be the interface for professional marketing, sales and above all logistics, is our main task.

A major concern of international buyers, especially when purchasing rose oil from Persia, was and still is the inconsistency in quality at higher purchase quantities, the failure to guarantee the agreed purchase quantities, contractual concerns, but also logistical difficulties. We have eliminated all this and much more with hard work and persistence and are trying to build trust.

The aim is, among other things, to awaken the dormant or sluggish private industry and at the same time to be a focal point in the heart of Europe to ensure quality and communication and try to fill the very large gap between the production culture in the country and the international buyers in an increasingly diversifying and competitive world.

What other oils do you provide?

The culture of oils and herbal potions has always been an integral part of Persian culture and has spread from there to a great many countries over the centuries. This culture reached its peak at the time of the Persian scientist and physician "Avicenna", who compiled and strongly emphasised these aspects in his books, which were taught for centuries at universities all over the world.

Based on this culture, we had planned to start with the oils and extracts that are specific to Persia and subsequently offer other interesting oils with potential on an international level. We have the possibility of 25 different oils so far and the trend is growing (see http://adler-international.com/handel-2/).

However, rose oil, which we started with more than 25 years ago, is leading the way. But also saffron oil, galbanum oil, lavender oil, etc. are available.

We offer the rose oil both organically certified and in 100% pure quality.

The 100% pure rose oil is itself offered in three different variations:

3) Mixture of 1st and 2nd distillation

We hope that with the support of partners and loyal customers we can realise these goals, while contributing to the sustainable development and the increase of cultivation and standards in different growing regions of the world.