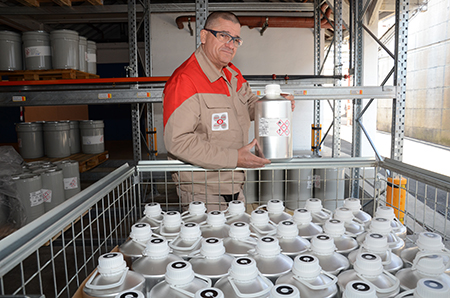 In response to the growing demand for hand sanitizer to limit the spread of coronavirus (COVID- 19), Givaudan, the global leader in flavours and fragrances, has set up a dedicated production line in Switzerland (Vernier site), and will be donating over 60 tonnes (equivalent to 700,000 bottles) over the next two weeks.

Beneficiaries of the hand sanitizer include Swiss hospitals in the Geneva and Vaud cantons close to Givaudan’s Vernier site, local transport partners including Geneva airport, Geneva public transportation, NGOs and small associations, and important local services which are all supporting the pandemic efforts.

In addition, smaller quantities of hand sanitizer are being produced in other Givaudan sites in the US, Europe and Singapore. This is to provide protection for employees and to support local communities and services with their increasing needs. Over the coming weeks, the Company aims to increase production output to provide further donations.

“In a short space of time, we’ve managed to establish dedicated production lines of hand sanitizer to produce up to 8 tonnes a day, helping to keep our employees protected, but also allowing us to supply to those on the front line including local hospitals,” said CEO Gilles Andrier. “My thanks and gratitude to our production and supply chain teams who are working hard to adapt our production, and to our employees who have volunteered to pack up the sanitizer, so we can reach those communities in need.”

Givaudan has also established a COVID-19 communities fund, and made a donation of
CHF 1 million, to enable Givaudan sites to support local communities that have been affected by the global COVID-19 pandemic.

* based on the average bottle of hand sanitizer being 100ml

About Givaudan
Givaudan is the global leader in the creation of flavours and fragrances. In close collaboration with food, beverage, consumer product and fragrance partners, Givaudan develops tastes and scents that delight consumers the world over. With a passion to understand consumers’ preferences and a relentless drive to innovate, Givaudan is at the forefront of creating flavours and fragrances that ‘engage your senses’. The Company achieved sales of CHF 6.2 billion in 2019. Headquartered in Switzerland with local presence in over 180 locations, the Company has over 14,900 employees worldwide. Givaudan invites you to discover more at www.givaudan.com.