A team of students from the Lingen Wirtschaft vocational school has been awarded the special prize in chemistry in the 2019 “Jugend gründet” (Youth Startups) competition for a sustainable business idea. The winners, Lea Großmann, Felix Ströer, Christin Stover, Anneliese Bangert, and Bennet Elfert, can look forward to a trip to one of ALTANA’s largest research and production sites, in Wallingford near New York (USA), where the students will gain exclusive insights into the work processes of ALTANA’s BYK division. 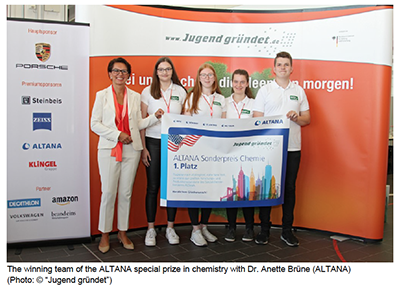 The prospective entrepreneurs entered the competition as a team called “Grün und Clever GmbH”. Their business idea is a perfected mini biogas system for the restaurant trade which produces electricity and heat. What is more, the organic waste can be disposed of. With the innovation, they want to promote ecological thinking in society and ensure that with sustainability everyone can contribute to a better future. “We can’t change the world today, but we can start today: green and clever!” the students from Lingen in Lower Saxony explained to the “Jugend gründet” jury. During the competition, the students were supervised by their teacher Mariska Knappert, who will fly to the U.S. with them.
ALTANA’s special prize in chemistry was presented for the fifth time in a row. It honors an innovative business idea within the framework of the “Jugend gründet” competition in order to heighten young people’s awareness of the fascinating field of chemistry research. “This year, we were particularly convinced by the winning team’s consistent focus on the sustainability of the business idea,” explained Dr. Anette Brüne, Head of Marketing & Sales Services of the ALTANA subsidiary BYK-Chemie GmbH, in her speech during the festive award ceremony. “The students from Lingen showed once again that innovative solutions in the field of chemistry can make an important contribution to climate protection and at the same time be economically successful.”
The team from Lingen that won the special prize was the only group from Lower Saxony to be invited to the nationwide final in 2019. The ten best teams of the competition year, consisting of 37 students from the federal states of Berlin, Hesse, Baden-Württemberg, Bavaria, North Rhine-Westphalia, and Rhineland-Palatinate, had the task of designing a tradeshow booth and convincing the jury members of their business ideas. Their efforts paid off: the winning teams from Berlin and Oppenheim can look forward to a guided tour in Silicon Valley (USA).
After the tradeshow for future startups, the “Jugend gründet” finalists and special prize winners listened to lectures by Lukas Gärtner and Lisa Wuhrer on the hot topics of e-mobility and car connectivity. On the Tuesday after the award ceremony, they are invited to tour the Porsche Training Center with Learning Factory 4.0 and Digital Printing, followed by a visit to the Wizemann Coworking Space with talks about startups. At the end of the program, the finalists can get impressions of Stuttgart on a guided walking tour of Bad Cannstadt.
In the 2018-2019 “Jugend gründet” competition year, a total of 739 business plans were submitted and evaluated individually by the jury. Around 4,000 participants were registered at the end of the competition year. “Jugend gründet” has been sponsored by the German Federal Ministry of Education and Research since 2003 and is on the list of student competitions recommended by the Conference of the Ministers of Education and Cultural Affairs. The Pforzheim-based Steinbeis Innovation Center is responsible for the development and implementation of the competition.
Sponsors and promoters
“Jugend gründet” is supported by a number of renowned sponsors who help publicize the event and fund the prizes and the events. The main sponsor is Porsche. The organization of the nationwide final of “Jugend gründet” is supported by the Stuttgart Foundation for Economic Promotion.
Detailed information on the federal competition can be found at www.jugend-gruendet.de. Information about the event and a team overview is available at:
https://www.jugend-gruendet.de/presse/veranstaltungen-downloads/
About ALTANA:
ALTANA is a global leader in true specialty chemicals. The Group offers innovative, environmentally compatible solutions for coating manufacturers, paint and plastics processors, the printing and packaging industries, the cosmetics sector and the electrical and electronics industry. The product range includes additives, special coatings and adhesives, effect pigments, sealants and compounds, impregnating resins and varnishes, and testing and measuring instruments. ALTANA's four divisions, BYK, ECKART, ELANTAS, and ACTEGA, all occupy a leading position in their target markets with respect to quality, product solution expertise, innovation and service.
Headquartered in Wesel, Germany, the ALTANA Group has 47 production facilities and 60 service and research laboratories worldwide. Throughout the Group about 6,400 people work to ensure the worldwide success of ALTANA. In 2018, ALTANA achieved sales of €2.3 billion. About 7 percent of sales are invested in research and development every year. Its high earning power and high growth rate make ALTANA one of the most innovative, fastest growing, and profitable chemical companies in the world.
www.altana.com