Henkel has launched a global employee initiative as part of its commitment to foster a functioning circular economy and reduce plastic waste in the environment: Around 1,300 Henkel employees around the world have so far taken part in clean-up events and removed waste from riverbanks, parks and cities. The aim of the ‘trashfighter’ initiative is to further raise awareness of waste in the environment. The plastic collection activities are part of the Sustainability Ambassador program launched by Henkel in 2012. 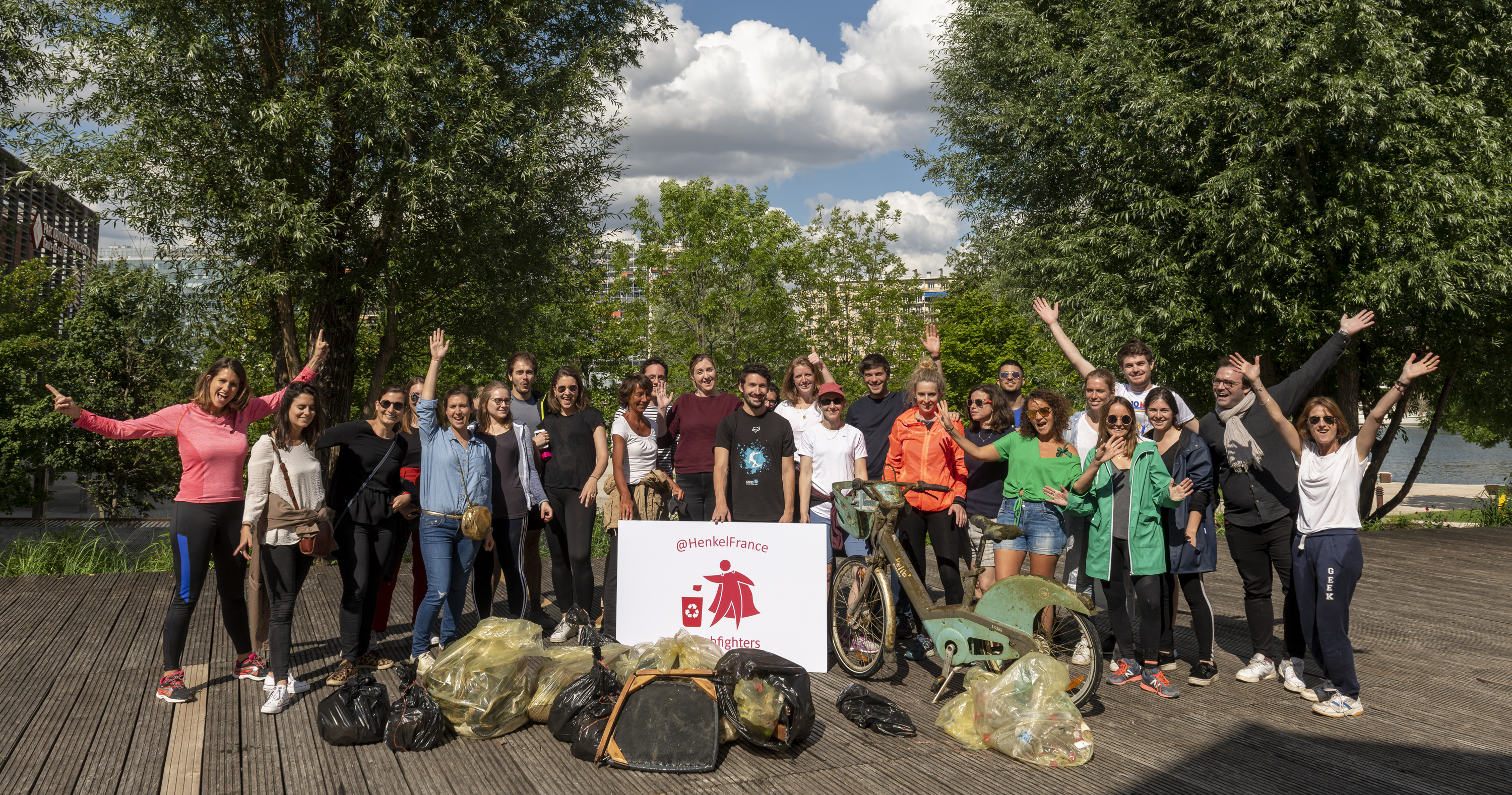 Henkel France employees participate in the ‘trashfighters’ initiative to clean up trash and raise awareness against plastic waste in the environment.

‘Trashfighter’ clean-up events all over the world

The initiative started a few weeks ago. Since then, Henkel employees in 18 countries have organized collection campaigns to contribute to cleaning their environment, cities, parks or green spaces from trash. In Thailand, for example, teams cleaned up beaches – apart from plastic waste, they also collected fishing nets and glass bottles. In the US, Henkel's largest single market, 16 collection events have taken place close to local facilities. Also teams from the company’s headquarters in Düsseldorf, Germany, were actively involved: More than 150 Henkel employees collected plastic waste as ‘trashfighters’, at riverbanks or local neighborhoods.
"Plastic waste in the environment is one of the greatest global challenges. As a company, we want to promote sustainable packaging solutions and contribute to a circular economy for plastic. At the same time, we want to involve all our employees as sustainability ambassadors and give them the opportunity to make an individual contribution," says Uwe Bergmann, Head of Sustainability Management at Henkel.

For Henkel, sustainability has always been an integral part of its activities and is embedded in its company culture. As part of its strategy for sustainable packaging, the company has set itself specific targets to promote a circular economy for plastic: By 2025, all packaging will be recyclable, reusable or compostable* and the proportion of recycled plastic in the packaging of consumer products in Europe will rise to 35 percent. Already today, many product packaging already consists of 100 percent recycled plastic.
To achieve these targets and to drive innovation in packaging development, the close cooperation with partners is an important lever. For example, Henkel participates in the New Plastics Economy initiative. The company is also a founding member of the global Alliance to End Plastic Waste, which promotes solutions for reducing plastic waste. Henkel also partners with social enterprise Plastic Bank to prevent plastic waste from entering the oceans in developing countries – and to use the collected and processed material, known as Social Plastic, in product packaging.
* Excluding adhesive products where residue may affect recyclability or pollute recycling streams.
About Henkel
Henkel operates globally with a well-balanced and diversified portfolio. The company holds leading positions with its three business units in both industrial and consumer businesses thanks to strong brands, innovations and technologies. Henkel Adhesive Technologies is the global leader in the adhesives market – across all industry segments worldwide. In its Laundry & Home Care and Beauty Care businesses, Henkel holds leading positions in many markets and categories around the world. Founded in 1876, Henkel looks back on more than 140 years of success. In 2017, Henkel reported sales of 20 billion euros and adjusted operating profit of around 3.5 billion euros. Combined sales of the respective top brands of the three business units – Loctite, Schwarzkopf and Persil – amounted to 6.4 billion euros. Henkel employs more than 53,000 people globally – a passionate and highly diverse team, united by a strong company culture, a common purpose to create sustainable value, and shared values. As a recognized leader in sustainability, Henkel holds top positions in many international indices and rankings. Henkel’s preferred shares are listed in the German stock index DAX. For more information, please visit www.henkel.com.